I’m proud to be a pharmacist for a number of reasons, and do not believe that we are in any way an elite. I gave this address to final year pharmacy students on 24th January as they stood up the Government and the Pharmaceutical society who were preventing them from being paid for their final year work placements. 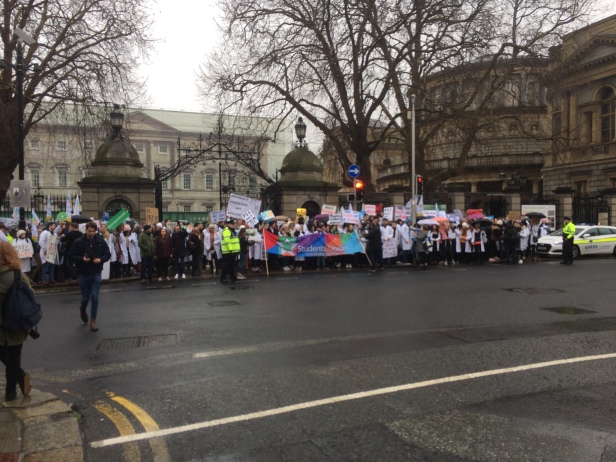 I learned almost everything I know about being a pharmacist in my pre-registration year, which was the equivalent back then of the final year of practice a pharmacist does before they are allowed do the exam to join the pharmaceutical society. I won the 1997 pre-registration year prize, which was a big surprise as I was quite an average student while at Trinity. I would never have done so well if the pharmacy team at Letterkenny General Hospital hadn’t put so much into me, and if the hospital were not paying me the “student pharmacist” salary.

According to the HSE Consolidet payscales, that salary works out at €1722 per month after tax. Rent in Dublin would eat a big chunk of that now and leave very little for other expenses, not to mention student debt and the €9,000 fees that colleges now want for the final year of pharmacy (and various other courses that lead to professional qualifications)

Unpaid internships are regressive. They limit access to those whose parents can afford to put them up for a fifth year of college, perhaps the children of existing financially successful pharmacists, children of doctors who don’t get the points for medicines, or maybe oil barons from the Middle East (could this be the market that is being targeted?)

There has been too much focus on the financially lucrative end of pharmacy. This was evident in the 2007 Pharmacy Act which Mary Harney introduced to regulate what were called “retail pharmacy businesses.” The training places involved are not millionaire internships where the secrets of commercial success are shared behind closed doors with those who sacrifice an unpaid year to join the club of pharmacy, and keep the ultimate closed shop closed.

To me pharmacy is about keeping people safe from the risks of medication, essentially poisons which can be used cautiously to cure the body, it still poisons when used unwisely. This skill needs engaged learning, and independent thought, especially now in our chaotic health system. If our students can’t look after their own basic needs while working and learning how can they think independently or engage in learning? (This goes for our student nurses too). It doesn’t benefit anyone to have zombies in the frontline looking after vulnerable patients.

I’ve tutored and mentored over 40 patients from schools of pharmacy in Ireland, Finland, France, Portugal and the United States. I have seen a marked difference between those who were unpaid and those who got some form of payment. One student worked the minimum 4 days with me and then went to a retail pharmacy 100km and a bus and train ride away to work a 3 day paid weekend. This was every week: 7 days out of 7. I don’t think he learned much.

I’ve also found members of my team opt out of helping to educate students, because the effort of being shadowed by an unpaid student is like having to do the job twice. All health professionals are on a career long pathway of learning: why stifle the first steps? Paid work as part of a team is how we all learn.

As a professional pharmacy is sleepwalking into a dark future of poorly trained pharmacists. I am calling for the final year students to be paid, and for all of the college courses (engineering etc.) which are moving towards making a postgraduate masters the entry level to reconsider and not have exhorbitant fees for their final year.