As some of you will know, I held a climate and biodiversity camp for 9 children from 29th October to 1st November last from my kitchen.

You can read about the principles behind the camp in my post from last November (here), but below is a description of how it went, and what we do. I am hoping to scale the camp up in the Summer, but as imitation is flattery, and I urge you to copy what we have done here!  Given that many parents are at home with their children because of COVID-19, this post might serve as a source of ideas on what might help keep the children busy and entertained, while at the same time give them some skills they can use.

Planning was key to the operation. I’m not trained as a teacher, but I found always having an answer to the “what are we doing next” question was useful, as well as being able to stop now and then and answer the “why” questions, giving the benefits of what we were doing. I had planned different themes for the days, but these were weather dependent, and so became a moveable feast.

After a brief chat with the kids, to find out what they knew and what they wanted to know about climate change and what we need to do, we went on a nature walk to the memorial park in Islandbridge. The plan was to collect seeds and leaves, and identify them.

There are various apps available for mobile phones to help with identifying trees and plants. I used PictureThis – plant identifier for my iPhone. The kids enjoyed using this, so it might be a useful tool to make any walk into a nature walk, particularly for parents like me who can’t identify even our common trees on sight.

I had hoped to use Curio-xyz as part of a local project, but hadn’t time to organise myself.

When we returned, we started our own tree nursery by planting the seeds of the trees we had collected in pots. We wrote the children’s names on these and the variety of tree. As we speak 6 months on, these have not yet sprouted, but I have a mini-nursery which the kids will hear about when their trees do sprout.

As it was late October, mustard seeds were something that would sprout. These have the advantage of starting to grow within a week, so each child had a chance to sow some of these. Another alternative for families it to grow an apple tree from seeds. There are directions to do this on the internet or YouTube. 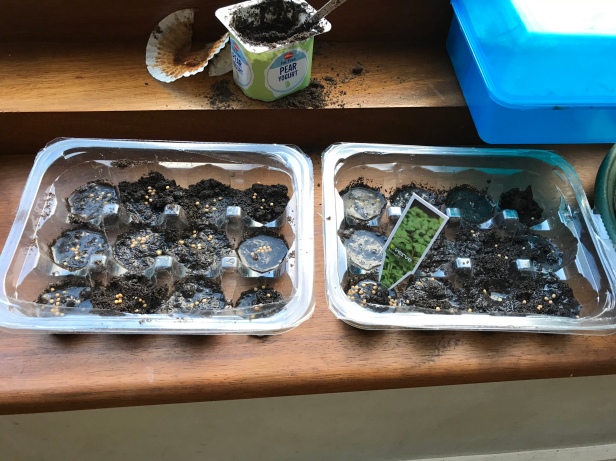 We moved on to making seed bombs after that. The instructions on how to do this are available here from the website “instructables” . Potters clay was hard to get my hands on, so I used Plaster of Paris which was available in the art and hobbies section of a DIY store. Wildflower seeds should be native to your area, I bought mine from www.meadowmania.ie/ which ships from the UK. We also boosted our seed bombs with seeds gathered by Green Party colleague Linda Gibson.

I also had a chat with the kids about trees and their advantages in an urban area like Inchicore. We discussed their role in providing oxygen, as well as looking at which trees are suitable for city streets and gardens, and the thought that some trees (even native ones) are not suitable for urban areas, because of their size or because of their biological properties (e.g. releasing chemicals that worsen vehicular or particulate pollution)

We finished all days with feedback from the kids. It seemed they loved the freedom of the trip to the park.

I had originally planned to start with this, but as rain was expected on Wednesday, this days plan was factored around not leaving the house. I used some modules from the EPAs educational materials www.epa.ie/researchandeducation/education/primary/ for this part.

Each child made a map of their favourite place or their route to school, picking out landmarks on the way. They also took into account some of the environmental challenges and considered how the area could be improved. We had conversations about derelict spaces, dumping spots and flooding risks. We also spoke about nice spaces with trees and playgrounds.

We followed that up with making DIY bath bombs, https://www.brit.co/diy-bath-bombs/, which was combined with a discussion on clean water and using only materials that break down in nature. Again, like the seed bombs, the children enjoyed the chance of getting stuck in with their hands. Interestingly, when I later tried to make bath bombs myself as zero waste Christmas presents, I didn’t have the skills the children had to stop the bicarbonate and citric acid from combining during the manufacturing process (this is what creates the bomb). Citric acid can be purchased from a local pharmacy, but you may have to request it in advance. 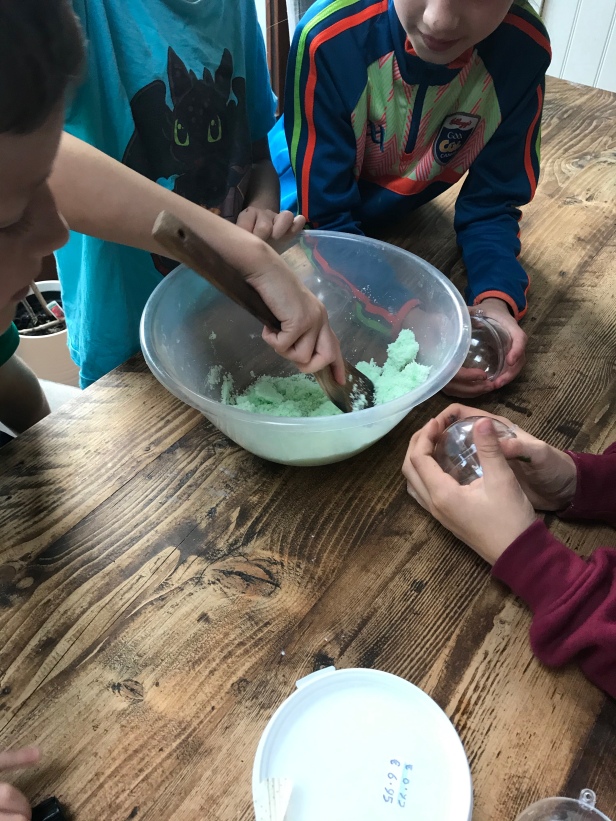 We also started making posters to raise awareness among adults and other children of the children’s concerns about the environment.

Day 3 Plastics in the environment

The children picked litter in the lanes and roads around the house, filling a bag in the process, and documenting what we found. We also looked at who the manufacturers were of the different items that we found. This led us to a conversation on packaging, looking at whose interest it is in to wrap everything in plastic.

As Wednesdays posters were now dry, we were able to glue them on to used election posters and waterproof them with PVP glue. These were then given to the children so that they could mount them on lamp posts near their own homes. 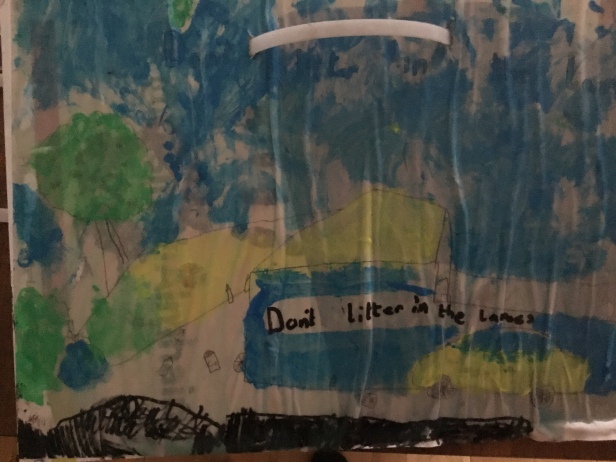 We finally got to have a cycle around the estate as the weather held off. The kids had been waiting for this, but we first had to start with a check on all the equipment. The children helped in pumping all the tires and oiling all chains and joints. We checked the brakes and gears, tightening them where necessary and then we set off.

On the way we discussed keeping safe on the road, listening and watching out for other road users. Each child had a turn of being the leader, and was asked to use hand signals to help the others to anticipate what they were going to do next.

We have the advantage of living in an estate with relatively little traffic and a warren of safe back lanes. Others might need to carry out this activity in a park.

The final part of the week was a traffic audit. At 12 noon on a Friday we looked at different aspects of motor traffic passing the junction of Grattan Crescent and Emmet/Tyrconnell Roads in Inchicore.

Some children measured the length of time it takes to cross the roads as a pedestrian, and how long you have to wait for a green man, compared to how long the traffic signal was. Other children were counting the types of vehicle passing, whether they were cars, trucks, bicycles or buses. A further group looked at how many people were in each car.

We also measured sound, using an iPhone Decibel Meter app. Interestingly, during the lockdown 6 months later, sound levels are significantly lower, but we don’t need a machine to tell us that. We listened to the different sounds between vehicles, including a motorcycle, and the difference between Diesel and Petrol cars (no electrics or hybrids passed)

The final part of the audit was a smell test. I asked the children to describe what they could smell when the different vehicles passed. It has been interesting to note that what we take for granted in our modern cities: for months afterwards I was still noticing the smell of traffic at busy intersections.

We had looked at recording a version of Neil Young’s “After the Goldrush” which has been updated for climate change by the Resistance Choir. The kids didn’t seem interested, so I didn’t push it.

We also considered watching some of the episodes of David Attenborough’s “Blue Planet” I or II. To some extent this would have been used to give teaching a break. I had considered some of the “Story of Stuff” material, but thought that this was more orientated to an older audience. I am still open to looking at good educational film material for this age group and think it would fit in to a camp.

Had the camp taken place in the spring or summer, we would have included more gardening with some practical work on looking after growing plants, including some weeding, while looking at the advantages of leaving weeds in place.

I also toyed with the idea of building a bug hotel, see https://www.redtedart.com/simple-bug-hotel-for-kids/

There are also various nature focussed arts and crafts activities that can be carried out. I am thankful to Elaine Butler and her living lightly in Ireland blog on WordPress in particular https://livinglightlyinireland.com/2017/06/30/summer-activities-with-kids-2017/

Insurance is available from Amarach for summer camps. This costs in the region of €2.25 per child per week and €4 per teacher per week, to a minimum of €155. This includes nature walks etc.

I enlisted the help of my teenage niece, who was off school for the week. We estimated that that the workload was manageable for two of us, with a ratio of 1:4 or 5 on the field trips. Given that the range of ages went from 5-12, there was a mix of levels of engagement, so perhaps with a smaller range of ages the group might have been cohesive. Additionally I was giving the content and supervising. I estimate that only 3 adults/older teens would be needed for a group of 20, and perhaps 4 for 30. If there was a trained teacher or youth leader involved, fewer could work, but for a hospital pharmacist, that’s my estimate!

I ran this camp from my kitchen, given that 3 of the kids were my own, and there was an art camp on in the local hall. There was space for 9 kids, but I appreciate that most Dublin 8 kitchens wouldn’t have that capacity. There are a number of halls in the area that could be used (see Future Ideas below)

I would like to scale this camp up in the future, The local community hall would allow for renting of the hall for about €300 for a week, which would make a camp for about 30 kids possible. This would work best either in the Easter holidays, when there is time to grow from seed, or in the summer when plants can be cared for and looked after. This would of course need a bigger team of people to run the camp.

Another idea was to run a bicycle camp, where the children met in one place, but cycled, like the school cycle bus, to different locations, such as the rediscovery centre in Ballymun and the Phoenix Park. This would probably suit bigger children though, so I might wait until my children are teenagers and competent cyclists.